China Is At It Again–Jerky Treats Kill 600 Dogs

I think it’s time we stop buying anything for our pets from China. Anybody remember how many thousands of dogs were killed a few years back because of bad dog food from China? 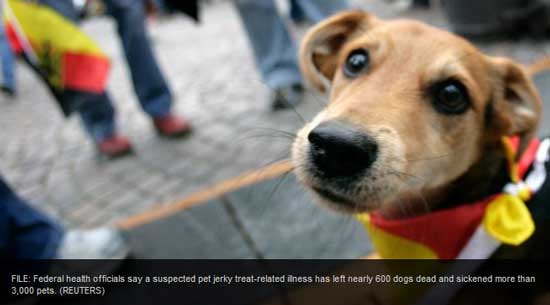 For details from Fox news, read on:

As reported by Fox News… The Food and Drug Administration issued an alert to consumers about the illnesses and deaths tied to jerky treats from China. According to officials, the exact cause of death remains unknown. Health officials are warning dog owners to be cautious about feeding their dogs jerky treats as they continue to investigate these illnesses. Nearly 600 dogs are dead, and more than 3,000 are sick.

“This is one of the most elusive and mysterious outbreaks we’ve encountered,” Bernadette Dunham, director of the FDA’s Center for Veterinary Medicine, said in a statement. “Our beloved four-legged companions deserve our best effort, and we are giving it.”

Reports from pet owners and vets regarding jerky treat-related illnesses date back to 2007 and have affected 3,600 dogs and 10 cats in the U.S.A. Approximately 580 of those pets have perished, according to a news release.

How Do I Know If My Pet Is Sick?

Symptoms observed within hours of eating the treats include:

If your pet has any of these symptoms, please contact your vet ASAP! Severe cases have involved kidney failure and gastrointestinal bleeding, the FDA said. “Our fervent hope as animal lovers is that we will soon find the cause of—and put a stop to—these illnesses,” Dunham said.