How to Safely Greet a Fearful or Anxious Dog

I have a lovely neighbor down the road who just got a 2-yo Dachshund from Rescue. It’s her first dog since she’s been a child and she couldn’t be more excited or in love with this lucky dog. And… she’s a little out of practice on how she needs to be introducing her new family member to strangers. Especially, since this dog is prone to fear aggression.

So when we met on the road and she asked me to say hello to Pixie, it gave me the opening to ask if she’d mind if I helped her work with Pixie.  She was very appreciative of the offer, adding that most of the neighbors didn’t want to take the time to help Pixie get better at greeting people. I couldn’t blame those neighbors. Most of them don’t have dogs, and certainly not dogs who are lunging, barking, and snapping at them as they come near.

Having rescued and trained some very difficult dogs in my day, my heart went out to Shelly because I knew she wanted to do right by her dog, but didn’t know how to set up both her dog and the people she might greet for success.

First, let me point out a few common mistakes Shelly made in how she let Pixie “say hello.”

1. Shelly spoke in a high pitched, excited voice while pulling back on the leash, telling Pixie what a good dog she was. Shelly believed she was just reassuring Pixie that everything was all right. In fact, she was inadvertently reinforcing exactly the behavior she was trying to stop. From Pixie’s perspective, she hears her owner use an encouraging voice telling Pixie that it’s good to pull on the leash, and bark like crazy anytime strangers approach.

2. Shelly then asked if Pixie could come greet me while Pixie was still in an aroused state. Before I could answer, she pulled Pixie right up to me, even though Pixie was making it clear that she wasn’t comfortable approaching.  It was only because I’d known to stand sideways, relaxed and quiet, avert my gaze and not try to reach to pet Pixie, that I avoided getting bitten. As it was, Pixie did grab on to my pant leg, but quickly let go when I continued to be non-reactive. From Pixie’s perspective, she’s being held back, held back, held back, and then suddenly pulled toward someone. The message she’s being given is “my space is being invaded, and my person is rushing me so I must defend both of us.”

3. Shelly ignored or didn’t see that Pixie had nipped at me, and asked me to kneel down and extend my hand so Pixie could greet me. Because “if she can just say hello, then she’ll calm down.” Instead, I suggested that I just stand and calmly talk with Shelly while Pixie was allowed to sniff my legs. From Pixie’s perspective, if I had knelt down and leaned over to pet, she would have interpreted that as an aggressive gesture and I would have been most likely bitten for my efforts.

Here are the steps we took to get Pixie calm, comfortable, and happy to know me in less than 5 minutes:

Essentially all I did was let Pixie tell me when she felt safe enough to move to the next step. By letting her feel in control of when she was approached, and only speaking to her and rewarding her for calm behavior, in just a few minutes I was her new best friend.

If you ever have the opportunity and time to help a new dog owner socialize their dog, I hope that now armed with the proper and safe way to greet, you’ll be happy to help out. 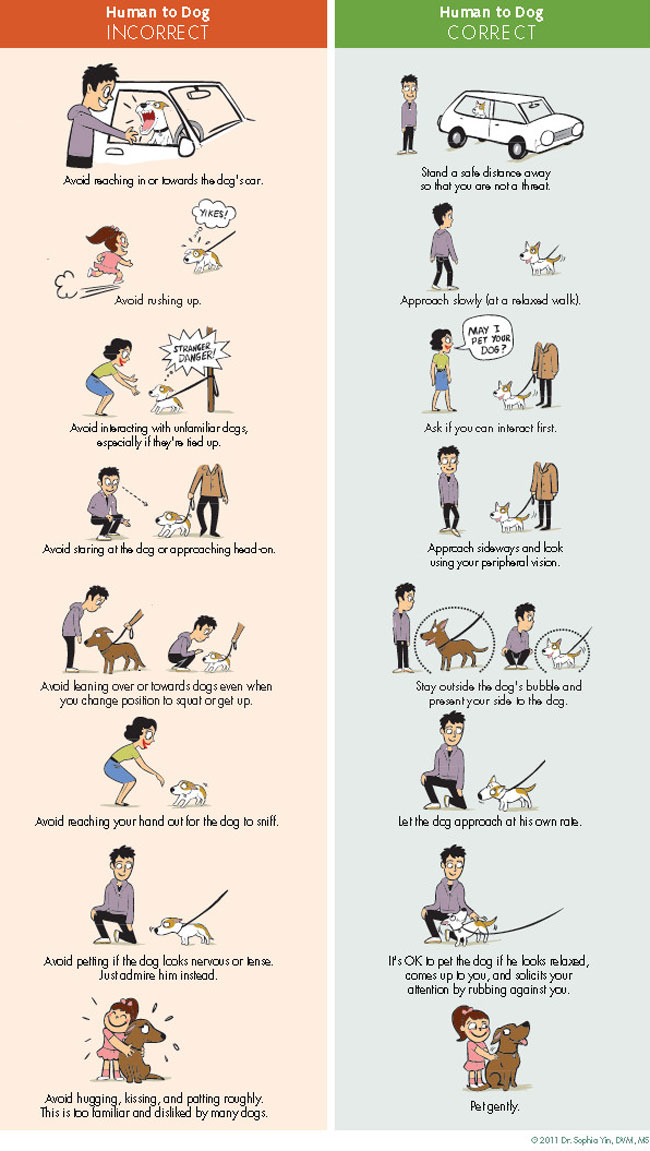 Thanks to Lili Chin for the illustrations.