Time for Remedial Training — How to Reteach “Come” 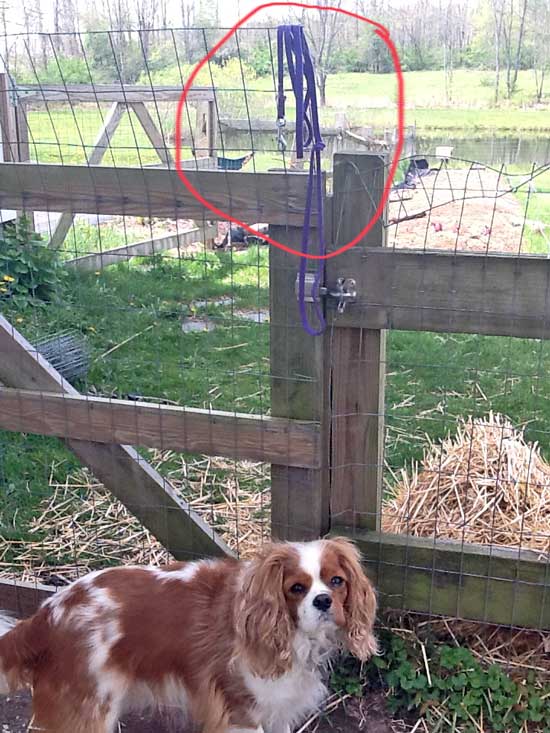 Have you ever seen such a forlorn face? Wink wants to go run in the fenced field but he has lost privileges.

You see, he’s recently gone deaf. No, not completely. Only upon hearing the word “Come.” Then he’s stone deaf!

That’s because he’s found something he considers way more interesting than me. Namely, a place where the wild ducks are able to squeeze under the fence.

As soon as that gate is opened, he flies to that spot and furiously digs, trying to get to them. Thankfully, he doesn’t have the ability to compress himself to fit under such a small opening and I’ve place a stone there so he can’t dig out. But when it’s time for him to come inside, he completely doesn’t hear me. Truly. That’s because when a dog is so intensely focused on a high adrenaline activity (in this case, hunting ducks — spaniels are bird dogs don’t forget) he literally stops hearing.

So I realize it’s fruitless to try to call him under these circumstances. In the off chance one or two of my calls do reach his ears, he’d still ignore them. And I sure don’t want to teach him that the word “Come” means “Fuggedaboutit!” Hence, the leash I now keep on the fence post for easy access.

Now when I want him to come, I go to him, put the leash on, wait a few moments to allow him to go back to digging. And then I call him while gently pulling on the leash so that he HAS NO CHOICE but to come to me.Then he gets a big reward of Finn’s smelly (but high quality) cat kibble. I swear he’d leap tall buildings for Finn’s kibble, that’s how much he loves it.

Then we rinse and repeat several times, ending on a happy kibble party all the way back to the house.

It’ll be another week or so before I have him completely back on track, but eventually he’ll remember that I’m way more cool than any silly ducks, and he’ll resume breaking the land speed record to get back to me.

The key to keeping your dog well-trained is to stay on of top of any digressions and deal with them immediately, before they have a chance to set it.Â  And when you do, it’s as easy as pie to keep that positive relationship with your dog. All it takes is a few simple tweaks every now and again.