In my earlier post on Operant Conditioning: Part 1, I explained how it can be used with great success at motivating 2-leggeds and 4-leggeds. I shared the example of how, at Cait’s suggestion, I used +R (Positive Reinforcement) along with -P (Negative Punishment) to help motivate her to change an undesired behavior (chewing with mouth open) to a desired behavior (chewing with mouth closed). You can read about how we did that here.

In this post, I’d like to delve more into the particulars of Operant Conditioning.  I’ll give examples of how it can be used correctly, along with examples of how you might be inadvertently using it to undermine yourself, your kids, and your dogs.

First, let’s  review how Operant Conditioning works. Once again, in scientific terms, “positive” and “negative” mean only to add something or take something away. The terms “reinforcement” and “punishment” equate to behavior increasing or decreasing.

When we combine those four words, we have:

Let’s take a look at how these work in real life.

This seems to be the easiest tool (consequence) for most people to understand and use. Positive reinforcement means starting or adding Something Good that the animal/kid likes or enjoys. Because the animal/kid wants to gain that Good Thing again, it will repeat the behavior that seems to cause that consequence.

(Take note of how easy it is to reinforce desired and undesired behavior):

The dog gets a food treat for coming when called. The cat gets a meal for hunting mice. The stallion gets a chance to mate for fighting off rivals. The child gets dessert for eating her vegetables. The worker gets a paycheck for working.

The dog gets attention from his people when he barks.  The child gets ice cream for begging incessantly. The dog gets to play in the park for pulling her owner there. The gambler gets a pile of coins for putting money in the slot machine.

Negative punishment means reducing a behavior by taking away Something Good. If the animal/kid was enjoying Something Good she will work to avoid having it taken away. She will be less likely to repeat a behavior that results in the loss of a Good Thing.

The brother has his favorite toy taken away for fighting with his sister.  The teenager is grounded for misbehavior. The owner stops the game and walks away when the dog barks aggressively to get her to throw another ball.

The dog is put on leash and taken from the park after coming when called. (This is a common mistake dog owners make, causing the unintentional result of the dog being less likely to come the next time he’s called.  Better to walk up to the dog and put on leash.)

Positive punishment is something that is applied to reduce a behavior.

Also keep in mind that, when used correctly, it’s not the animal/kid that’s “punished” (treated badly to pay for some moral wrong), but the behavior that’s “punished” (in other words, reduced). The danger with Positive punishment is that it’s very easy to use incorrectly, and to abuse.

The driver gets a ticket for speeding. The toddler’s hand gets burned from touching the hot stove. The student misses the school bus for forgetting to set his alarm.

The child is spanked for misbehaving.  The puppy has her nose rubbed in her pee for having an accident in the house.  A dog’s barking is interrupted by a surprise squirt of citronella.

Negative reinforcement increases a behavior by ending or taking away Something Bad or aversive. By making the animal’s/kid’s circumstances better, you’re rewarding him and increasing the likelihood that he will repeat the behavior that was occurring when you ended the Bad Thing.

One of the major results of taking away Something Bad is often relief. So another way to think of negative reinforcement is that you are providing relief to the animal/kid.

The dog is allowed to continue  its walk once it stops pulling on the leash.  The reins are loosened when the horse slows down. The car buzzer turns off when the driver puts on his seat-belt.  The baby stops crying when his mother feeds him.

The torture is stopped when the victim confesses. The ear pinch stops when the dog takes the dumbbell.

While Positive Punishment and Negative Reinforcement have their places, I’m not a big proponent of either. To be sure, there are caveats and concerns with using any of these methods.  In Part 3, I’ll take common examples of how Operant Conditioning is often misused, and give alternative and appropriate solutions.

If you’d like to more fully understand Operant Conditioning, Karen Pryor’s Don’t Shoot the Dog is considered a classic. 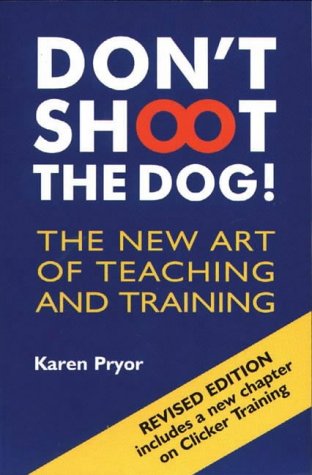 If you’d like to read a humorous, light-hearted look at how Operant Conditioning may be used beneficially to help humans, consider: