It’s that time of year; hard frosts herald the end of my gardening year.  As I work to put my garden to bed until next spring, it’s a good time to take stock of the growing season. This year, with summer weather more typical of Ireland than upstate NY, and less time available for gardening chores than I like, my garden was more under Mother Nature’s charge than mine. The results were mixed.

As I review the different veggies that provided bounties or busts, I plan for what seeds I’ll keep and plant again, and what varieties I probably won’t add back in. In part, this decision is always aided by my annual garden experiment.

Every year, I conduct a garden experiment with all the rigors of a research scientist–sort of… (You can look here and here to read about my last couple of experiments.)

For this year’s experiment, I decided to test the difference between pole and bush beans. I’ve been reading forever that pole beans are better-tasting and easier to harvest than bush beans. Having always grown bush beans, and after having paged through my Fedco catalog to read the same review yet again, I finally decided to conduct my own growing and tasting test.

To make the experiment valid, I set about finding a pole and bush bean of the same variety. Growing different varieties would be about as worth-while as comparing cooking pumpkins with carving pumpkins — taste, texture, and size would not be comparable. Kentucky Wonder was available in both, so I went with that.

Here’s what Fedco catalog has to say about Kentucky Wonder Pole Beans:  Also known as Old Homestead. “Of all the climbing kinds, we do not believe there is a better one than Kentucky Wonder; it is an old variety with solid meaty pods, 7-9” long, that are stringless when young, and when cooked no bean is better. It is enormously productive, the pods hanging in great clusters from top to bottom of the pole.”The nutty flavor makes them outstanding for freezing. Pick regularly to maintain quality and production.

Because of their vining habit, they need some kind of upright support. Some people make tipis out of bamboo or sticks, others set them along a fence, and still others pair them with sunflowers. I used a fence. 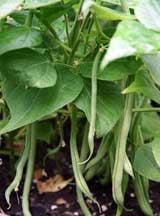 Kentucky Wonder Bush Beans do not require trellising. Strong bush vines hold pods off the ground. Pods are the same flattened shape as the pole, with 6-7″ long, medium green pods. They’re ready to pick in about 57 days versus the pole bean’s average of 65 days. They yield well and require the least amount of work. Unlike Pole Beans, they are determinate, which means they grow to a certain size, blossom, produce the fruit and then stop growing.  Because Bush Beans’ harvest will only last about 2 weeks, you can enjoy more if you make small individual plantings every 10 days or so.

I have to say, the pole beans were easier to harvest, produced longer, and in my side-by-side taste test, the pole beans won hands down. They were considerably more tender and flavorful. Looks like I’ll be sticking with pole beans from here on in.

What discoveries did you make in your garden this year?